The double-edged sword of values-based marketing

It’s hard to believe there was a time when brands could do incredibly creative things, such as augmented reality or encourage user-generated content related to a campaign, and the world heralded their ingenuity, without the worry of harassment or disruption from instigators.

Then, as the world shifted and it became increasingly important for brands to promote their values while selling their products and services, instigators began to wait with bated breath for a new campaign to launch—all in the name of forwarding their own malicious agendas.

In some cases, the campaigns have fared well. In others? Not so much.

Bud Light still shines during Thursday Night Football, but instead of its typical humorous tone, they are promoting Black-owned restaurants. Called “Bud Light Thursday Night Shoutout,” the brand highlights the personal stories of Black business owners to encourage fans to check them out, visit their restaurants, and tell friends and family. They also have partnered with the food app directory, EatOkra, to encourage football fans to visit Black-owned businesses.

While Bud Light has created values-based marketing revolved around the support of Black-owned businesses, Ben & Jerry’s, a brand known for taking a stand on societal issues, stepped up with “The Who We Are Project.” It is a six-part podcast series that links specific periods in American history to modern-day systemic racism and white supremacy.

Both organizations took on controversial issues and, in both cases, there has been a social media storm of negative commentary. Despite the instigators, though, the good outweighed the bad and these brands have gained more strong and influential supporters than not. This is because they stand up for what they believe in and promote their values from top to bottom.

While values-based marketing is always risky, the conversations consumers have had around these campaigns reflect how they feel about the brands. That feeling is based on their own values, not on the level of service they've received or the latest product features.

A values-led communications approach has become a game-changer for many brands. By showing consumers that they share the same values, brands hope to deepen the relationships, and develop a longer-term bond that a competitor's “limited time offer” cannot break.

It’s not without its risks, though. It requires thoughtful consideration for all of the pros and cons, just like one would do during crisis communications planning. Work through the policies around the values you stand behind and ask very important questions, such as what kind of backlash might there be? Who will the trolls, harassers, activists, and sophisticated bad actors be, and what will they say? What have other brands with similar messages had to deal with? How will you moderate to manage the response? Are you prepared for what could be disruptive, atypical risks?

How can you use early-warning risk intelligence to give you an idea of what you might face?

Let’s take a step back for a second and look holistically at values-based marketing. It’s often seen as a "Millennial thing" because they are the first generation to require brands to stand for something, but because of that, other generations are often ignored. The generation that grew up with untethered access to all things via the internet certainly demands brands to stand for something, but nearly every consumer today (77%, to be exact) couples their informed state with their desire to belong to something grounded in purpose. This gives them power to make brands act.

This approach is seen by some brands as the best way to build a deeper connection with consumers to stay top-of-mind and to create lifelong loyalty, but it carries deep risks. Attaching to profoundly held beliefs can amplify sales, but it can also alienate a group (or groups) of people who have always been brand loyal.

The way Ben & Jerry’s, Bud Light, and hundreds of other brands take a stance on societal issues has ushered in a new era of brand engagement. Both take a critical issue society faces and connect it with their brands in a meaningful way while approaching it from a multi-generational aspect. Through these efforts, brand values are at the forefront without having to be explicitly conveyed, which garners the support of consumers along the way.

At the same time, what seems to be an initial disaster can actually work out well in the long-run.

The Nike 2018 ad featuring Colin Kaepernick is one such example. The campaign featured the embattled free-agent NFL quarterback (who knelt at NFL games during the national anthem in protest of racial inequality) behind the words, “Believe in something. Even if it means sacrificing everything.” 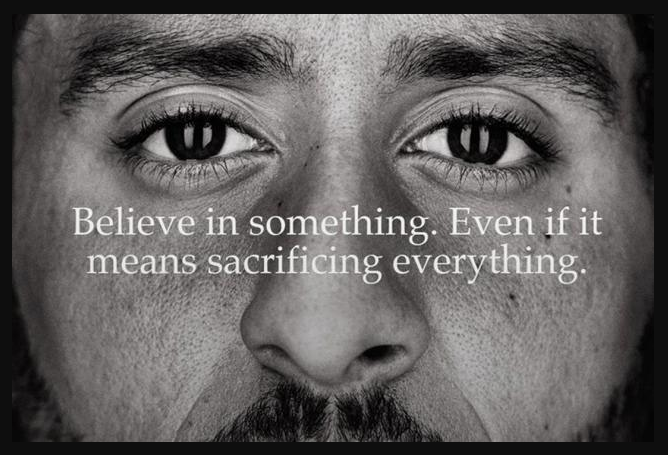 The Nike stock tumbled after the initial campaign, dropping $3.75 billion in market cap. Most companies would run with their tails between their legs with that kind of result. Because Nike took a longer-term view, though, they took a chance and stood up for their values—which ended up paying off.

On Sept. 17, 2020, Nike recognized the four years since Kaepernick took a knee with a black monochromatic jersey featuring his No. 7. The jersey sold out the same day it became available.

EA Sports also has put him back in the virtual game setting, where he can be chosen as a player in the latest Madden game.

Back to Early-warning Risk Intelligence

Shying away from a values-led approach might be easier, and certainly less risky. Today’s consumer, though, demands the brands they buy from to stand for something. Toms Shoes started it more than a decade ago and brands have followed suit—and embraced it—by taking it to the next level to support Black-owned businesses, Black Lives Matter, and organizations that back the change for societal issues.

This year, it’s become even more important for brands to take a stand and showcase how their values are aligned with those of their consumers. It’s no longer a “maybe we’ll do something someday”. It’s become table stakes.

Taking a deep breath as you hit publish to prepare for the instigators is new territory for everyone. It’s a risk brands haven’t had to contend with—and certainly not at this scale.

While there are case studies to analyze before hitting publish, the best way to ensure a values-based marketing campaign is successful from the start is to survey the landscape first. When you observe digital chatter from instigators and influencers 24/7, it provides the best early-warning signal that a campaign will succeed—or fail.

As you think about how to approach your own values-based marketing, be certain it’s not a reaction to what’s happening in the world. Rather, take a longer view of what your brand stands for and couple it with risk intelligence. Think about how your values meld with that of your consumers, and how you might demonstrate it through your communications.

Risk and resilience: The duality of digital chatter

Today’s risk forecast: Uncertainty with a chance of resiliency