What brands need to know about a potential QAnon strike

In 2019, a leaked FBI memo declared QAnon to be a domestic terrorist threat—one that is focused on carrying out violence in the U.S. The memo states that an “anti-government, identity-based, and fringe political conspiracy theory group is very likely to motivate some domestic extremists, wholly or in part, to engage in criminal or violent activity.”

To you or anyone else who has used social media in the past several months, it may be a relative or friend who has accidentally shared or propagated information about  conspiracies.

In 2017, a series of cryptic and anonymous posts said there was an imminent crackdown on the pedophilic “deep state”  that had taken over the U.S. government. They said that the crackdown was orchestrated by President Trump, himself.

Of course this crackdown (referred to by Q-devotees as “The Storm”) never occurred, but the movement has since only gotten stronger. They now have major followings on mainstream social platforms such as YouTube, Facebook, and Twitter.

In August, a QAnon supporter won the GOP nomination for Georgia’s 14th Congressional District and the president continues to refuse to debunk and disavow the organization.  Between those events and the successful hijack of the #SaveTheChildren hashtag, the movement has been able to more effectively stage recruiting events and manipulate news coverage.

It’s not just hate speech, social justice movements, or a global pandemic that lead the conspiracy theorists to latch onto a broader cause, either. There have been plenty of brands under fire; most recently Hasbro, Wayfair, Netflix, and Victoria’s Secret.

QAnon is a group of people who have based their narrative on the idea that Democrats, celebrities, and billionaires run the world while worshipping Satan, engaging in pedophilia, trafficking children, and harvesting blood from abused children.

It has, in a way, developed into a meta-conspiracy, connecting a range of conspiracies such as  anti-vax, anti-5G, anti-semitic, and anti-migrant. The author(s) of cryptic posts publish on the imageboard 8kun—called Q “drops”—that are generally vague so the QAnon community can assemble theories. They do this through a combination of crowdsourcing and speculation before disseminating them through a network of followers and influencers. In recent months, QAnon theories have latched onto the broader cause of combating child-trafficking in a more palatable, activist-oriented way, without the cryptic codes and reliance on specific movement narratives that had previously been used to promote their theories.

Recent events, including COVID-19 and the ensuing lockdown and the George Floyd protests, have resulted in a major surge in activity related to QAnon. Unique Twitter users discussing QAnon increased from an average of 37,302 in the first week of March 2020 to 89,338 by the final week, an increase of 139%.

Membership of Facebook groups relating to QAnon have also seen a similar increase during the same period. The post-March onset of global lockdowns was both a significant topic and contributing factor to this spike. A similar spike was seen after the murder of George Floyd and its subsequent protests.

How QAnon has managed to become mainstream

While brands have been the subject of QAnon conspiracies in the past, they rarely escape the dark, interconnected corners of the internet where Q followers typically operate. In the case of Wayfair, however, allegations that the furniture company was shipping kidnapped children across the country in expensive cabinets reached far beyond the still-dangerous but reasonably predictable networks where other theories had been confined. 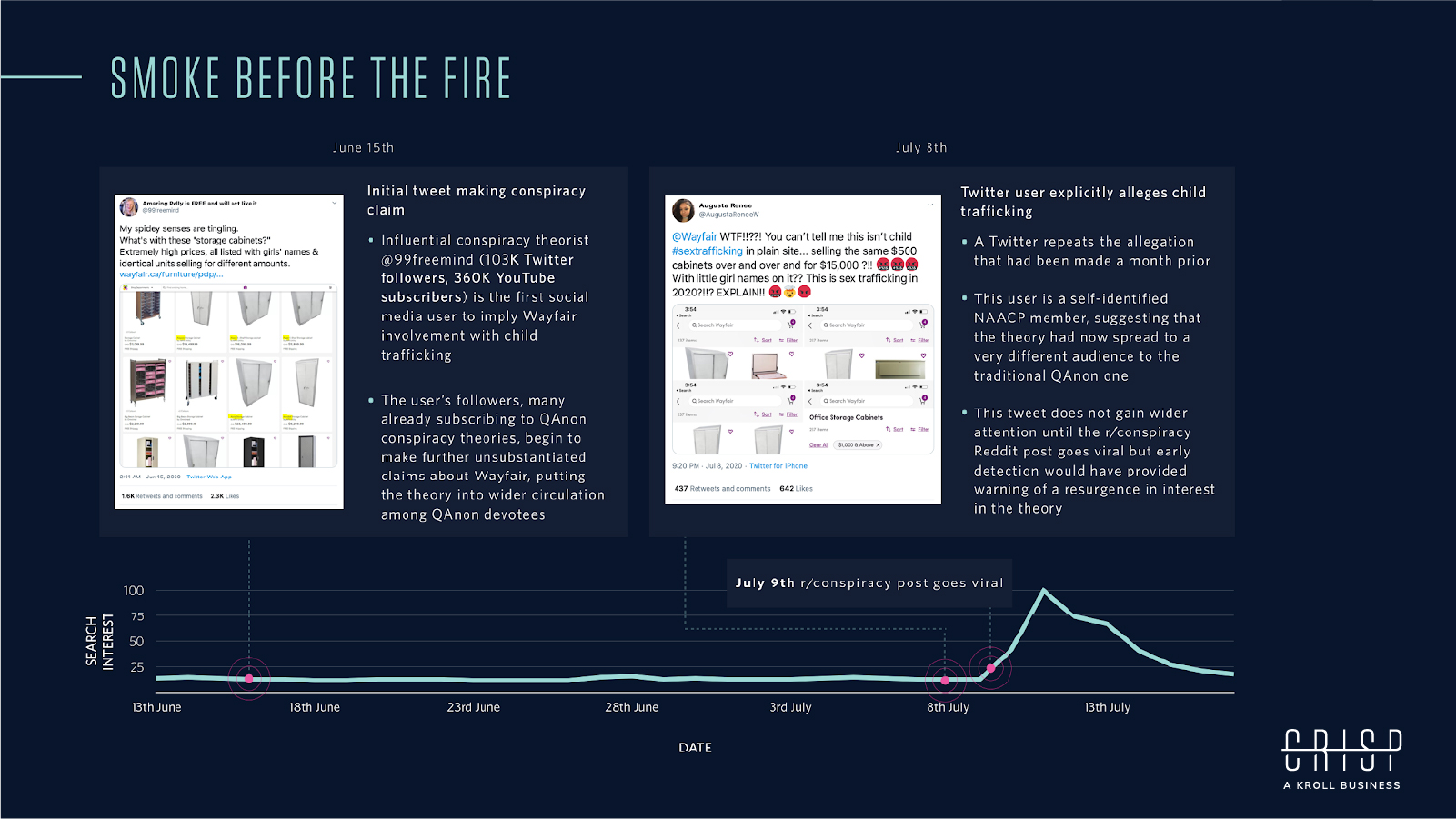 TikTok, one of the fastest-growing social networks, especially among Gen Z, found an accumulation of more than 10 million views on the #wayfairconspiracy hashtag, despite their constant removal of particularly egregious content and an in-app reminder for users of the hashtag. It stated, “We do not allow misinformation, including conspiracy theories, that could cause harm to people on TikTok or the wider public.”

The genesis of this theory can be traced to a single tweet from a prominent QAnon instigator and influencer where they implicitly made the accusation of child trafficking.

This tweet was posted three weeks before an unrelated Reddit user posted about it on a subreddit and explicitly mentioned child trafficking, which served as the catalyst for the theory going viral outside of QAnon circles.

While all of this was going on, people began to state their intention to boycott Wayfair and threats were directed at CEO Niraj Shah and their employees. In many cases, identities and residential addresses were among the details spread online.

Both brand reputation and physical safety are at risk

While Wayfair has so far suffered the most high-profile instance of QAnon targeting, many other brands are currently the subject of various conspiracies that they have engaged, or are complicit, in child trafficking and pedophilia. Many of these theories cause consumers to react in disgust and anger—spreading misinformation and calling for boycotts.

According to a Barron’s article, "If other companies are breathing a sigh of relief right now that they have avoided the QAnon behemoth this time, they shouldn’t be. QAnon pages, groups, forums, and accounts are already expanding their list of commercial sector suspects and have already targeted the likes of Amazon, Walmart, Etsy, and Target, among others."

The primary impact of these conspiracy theories is the damage inflicted on brand trust and reputation. Fake news and misinformation have already proven to be pervasive and unavoidable, but the specific type of disinformation spread by QAnon followers poses both reputational threat—which can cause a negative share price or a sudden sales drop—and a physical security threat.

There are, of course, things you can do to predict and plan for the eventual crisis and perhaps ending up in the crosshairs of QAnon. Crisis planning is critical because it’s no longer “if”, but “when”. With these specific threats, though, crisis planning alone is no longer enough.

Monitoring specific bad actors and their associated networks across multiple social media platforms in tandem is crucial to effectively tracking the spread and reach of these theories.

In the case of Wayfair, because the initial child trafficking tweet was published three weeks before the conspiracy theory went viral, there was an opportunity to identify it as a potential threat—using early-warning risk intelligence. This would have allowed the brand to investigate and would have shed light on how potentially far reaching the accusation could be.

While in the past these outlandish accusations haven’t made the jump from issues (albeit ones with significant reach) to full-blown crises, the well-established networks already assembled by QAnon followers allow content to rapidly go viral.

By using early-warning risk intelligence, you can monitor the signals that instigators and influencers provide. This helps you figure out the point at which this crosses beyond QAnon followers to a more mainstream audience, which is a key indicator of when a wild theory becomes a crisis.

Once a brand is on the radar of the QAnon network, you’re there for good. If a crisis is addressed effectively, this may be enough to regain public trust, but the issue has more likely than not just retreated below the surface rather than disappeared completely.  Therefore ongoing monitoring is an essential part of today's enterprise risk defense.