This year has completely changed the way the world does business. It’s not enough that a pandemic has created havoc on every aspect of the organization, it has also required companies and their leaders to step up and publicly state their values and take a stance on politically- and socially-charged issues in a way none of us has ever experienced.

It used to be that talking about certain subjects related to social or political views was taboo in the workplace. As a result, organizations could easily sidestep uncomfortable conversations and avoid issues that may upset. Today, though, not only is it acceptable to discuss one’s values, particularly as they relate to what’s going on in the world, it’s expected.

While we traverse these waters as organizations, employees, too, are finding their voices as they relate to social injustices and other movements. As all of this happens, the risk is two-fold: for the employer, these voices can uncover bigoted or racist employees hiding in plain sight, resulting in significant personnel and reputational issues; and for employees, they can unknowingly put themselves at risk of harassment in an environment that should be safe from harm.

Do You Have Bigoted or Racist Employees?

The increased use of social media, with people more freely expressing their opinions whenever, wherever, and to whomever they want, has led to situations where an employer might learn second-hand that an employee has posted something online, or made some other public statement that is perceived racist or bigoted about someone’s gender, national origin, religion, age, or sexual orientation.

Imagine a scenario where your brand-owned social media page receives a message—either publicly directed or via private message—that accuses an employee of being racist, sexist, hateful, or harassing and attaches screenshots or audio recordings.

Or, if through your own social media monitoring, you find an employee has used a racial epithet and told Black Lives Matter supporters to “get out of town with your [expletive] protesting,” long after the incident has already occurred.

If the employee makes these hateful comments during work hours and on an employer-provided computer, it’s relatively easy to address, particularly for companies with well-written, anti-discrimination policies that define workplace conduct. The more difficult scenario occurs when the person behaves badly during their personal time, on their personal technology, and on their personal online accounts. Increasingly, as internet users become more adept at linking information from multiple sources together, behavior is flagged to companies, even where the individual does not directly mention where they work in their social media profiles.

Regardless of when and how it happens, it can cause reputational damage and disruption to business. In many cases, it isn’t necessary to prove actual harm has occurred; the mere possibility is enough. An openly racist employee’s public comments can be the beginning of the creation of a hostile work environment especially for those employees who fall within the racial group that the comments target. It can also create liability should the employee act upon their racist feelings toward a colleague or customer.

A recent survey conducted by i4cp, the Institute for Corporate Production, asked about policies regarding how racist comments or content posted by employees on personal social media accounts are handled. 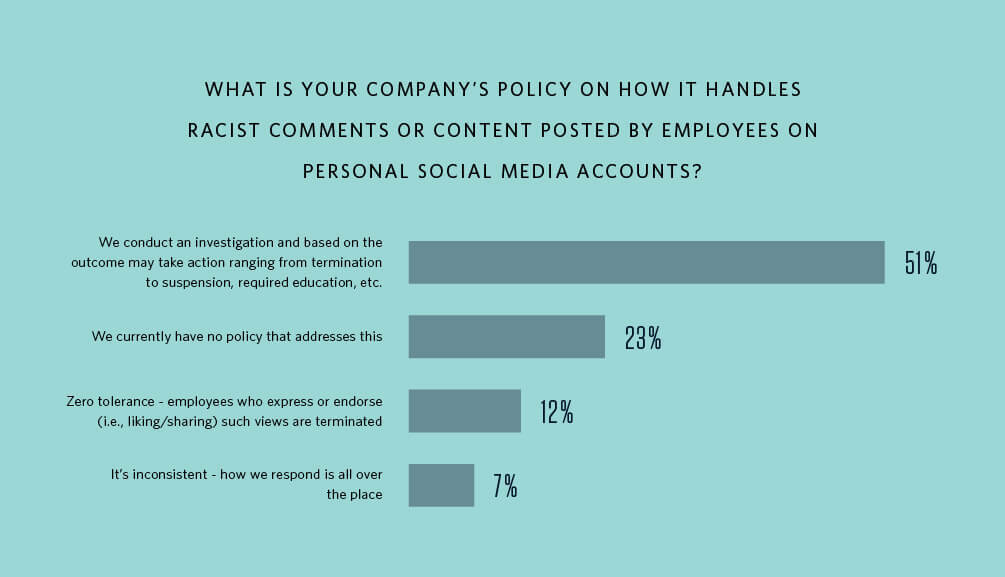 More than half (51%) said their organizations take an investigative approach—looking into the post(s) in question and making decisions based on what they learn. Surprisingly, nearly a quarter (23%) currently have no policy that addresses this at all.

According to i4cp, “A few survey respondents noted in their comments that, while their organizations’ stated core values and guiding principles are clear and reinforced to the workforce often, they aren’t sure what their organization’s policy is on racist social media posts.”

If your organization falls in the group of not having a policy—or not being clear about what it means should someone make a harmful comment online, now is the time to act.

Get Ahead of Racist and Bigoted Comments

Though it’s challenging to anticipate what an employee will do on their time, you’re expected to get ahead of problems before they appear publicly, particularly on brand-owned social media pages. There is a small window of opportunity to act and respond, during which the public still thinks it is an employee problem—not one of the organization. A clear policy with specific guidelines will help. So will knowing if there are employees who are known as instigators—trolls, bad actors, activists, or harassers.

Without proper early-warning risk intelligence to understand how and when an employee might make a hateful comment, and without a policy specific to racist comments online, organizations are left to scramble, which can oftentimes lead to a full-blown crisis. VIP social media vetting can also help. It reviews all historic posts made by an employee to identify behaviors not aligned to brand values. This can be done for new employees, or for existing, where their role is particularly sensitive or there is suspicion of risky social activity. It also allows the organization to respond in a timely manner, when something does occur, so it doesn’t also become a primary target of the public’s disgust.

Managing these risks effectively requires a coordinated effort between an experienced early-warning risk intelligence partner and your organization, both to set the guidelines and to find the instigators before they are reported to you.

Knowing this will allow you to not just plan for the inevitable, but to stay ahead of it and mitigate your corporate risk and that of your employees and your consumers.