With environmental, social and governance (ESG) agendas increasingly in the spotlight, companies have been put on notice by an expanded horizon of stakeholder audiences.

According to a Forrester Consulting Total Economic Impact™ study commissioned on behalf of Crisp, values-driven consumers, employees and shareholders are pushing for companies to demonstrate a higher commitment to ESG and corporate values.

While many of their motives for change are legitimate, some can be negatively influenced by disinformation campaigns or innocent misunderstandings. When left unaddressed, these audiences often turn to social media where they can promote calls for boycotts, resignations or lawsuits at scale.

This was recently illustrated in a Wall Street Journal story titled, “CEOs ignore social issues at their own peril,” which highlighted why CEOs now face compensation penalties or dismissal if they ignore complaints about issues such as diversity efforts, reducing their environmental footprint, or speaking out about politics.

Today’s values-based stakeholders are more vocal than ever

The Ethical Boardroom article they wrote titled, "Digital chatter: What boards need to know" shared how boards and management “have had to broaden their stakeholder horizon beyond just worrying about shareholders, to worrying about employees, communities and customers, let alone the deliberate actions of agenda-driven groups who exploit digital chatter to coordinate and execute new ways of undermining corporate reputation, operations or market value.”

Bonime-Blanc and Sharma go on to warn readers about the “unknown unknowns” lurking within digital chatter, everywhere from open social media channels to the Deep web. These unknown unknowns are “one of the least understood, and potentially most damaging types of risk that have emerged forcefully in recent times.” This is often where activists and agenda-driven groups coordinate in relative secrecy.

What’s more, these groups have a captive audience, given the empowerment felt by consumers, employees and shareholders, which is further validated by their ability to reach so many others via social media.

The Forrester Consulting TEI study validates this assessment and provides some salient details for corporate leaders:

Today’s empowered consumers are more opinionated, proactive, and vocal than ever. The proliferation of digital and social touchpoints lets consumer vocalizations spread like wildfire, often overpowering corporate messaging. A brand crisis can easily break consumers’ views regarding commitment to corporate values, damaging brand reputation and worth.

Values-focused employees are starting to exert their power.

More than ever, employees are acting like coordinated watch dogs; they're willing to publicly call out their company when its actions appear to conflict with its core values. Conversely, if a company lives its values, employees are more productive, advocate more strongly for their company to friends and family, and are less likely to take action such as petitions, walkouts, and public discourse against their employer.

Values-based investing is growing in importance.

Investors increasingly demand businesses take action to improve sustainability and societal impact as they track and report on their progress toward ESG goals. Forrester’s analysis of 75 annual 10-K reports from major B2C companies found that they all discussed their ESG goals, strategies, impact, and progress—most in significant detail.

Why this movement isn’t going away any time soon

ESG issues are tightly intertwined with today’s hyper-polarized risk environment. Unfortunately, companies that take a position (or don’t take a position) invariably get caught up in the turmoil when their statements regarding issues such as racial or gender inequality, social justice, voting rights or climate change are misconstrued or come across as inauthentic.

In fact, Crisp’s recent Communications Leaders Risk Survey, conducted in partnership with Kroll, revealed a staggering 86% of respondents said they expect more risks related to society issues to impact their organizations in the coming year. 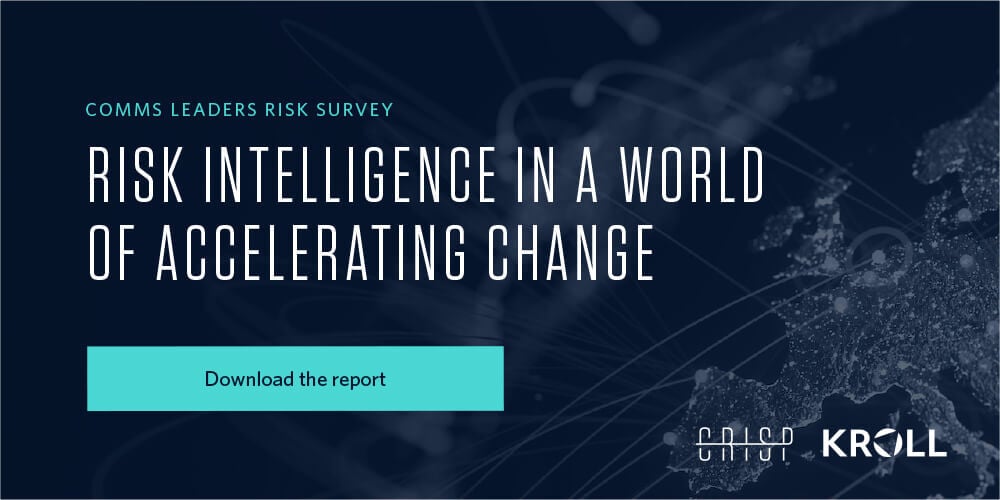 Cultural and societal relevance has never been more important as organizations begin to realize the potential financial consequences of failing to acknowledge and address the values of all their key stakeholders, not just shareholders.

When the Business Roundtable announced a new “Statement on the Purpose of a Corporation,” signed by 181 CEOs, it marked a commitment by corporations to push for an economy that serves all Americans—customers, employees, suppliers, communities and shareholders—not just shareholders.

This was further reinforced recently by BlackRock Chairman and CEO Larry Fink’s 2021 letter to CEOs, which detailed how purposeful companies with better ESG profiles had positive bottom-line results. “It is clear that being connected to stakeholders – establishing trust with them, and acting with purpose – enables a company to understand and respond to the changes happening in the world,” he wrote.

According to the USC Annenberg Center for Public Relations 2021 Global Communication Report, which surveyed nearly 1,000 public relations professionals from around the world, 36% of corporate communicators forecast that their companies will be more likely to take a public stand on societal issues in the future.

The majority of communications respondents expect activist demands on businesses as well as consumer and employee expectations of businesses' role in society to rise this year. This will increase the sense of urgency to adopt new resilience models and technologies that prioritize risk intelligence.

Organizations have recognized the importance of living their purpose and values, both ethically and financially. However, these same companies now face a powerful system of checks and balances governed by stakeholders who use social media to hold them accountable for irresponsible practices or poor governance.

In response, company leaders find it increasingly difficult to identify emerging risks because of the overwhelming volume, variety and velocity of digital chatter. For every company that’s underprepared, there is an agenda-driven group or internet-savvy actor ready to exploit their challenges, dramatically accelerating risk and shortening the time available for the company to react or respond.

Crisp’s actor-centric approach has redefined the way companies identify and mitigate risks. Our Risk Intelligence Graph analyzes millions of digital conversations in real-time, revealing the hidden relationships between individuals and groups in order to predict customer impacts as early as possible. This is an essential best practice for contemporary executives and the organizations they lead.

In addition to living their ESG values effectively, the Forrester Consulting TEI study found that Crisp customers reduced the impact of a crisis by 40 percent, prevented one per year, and achieved a 572% ROI.

Your brand is at risk and everyone is watching

Risk and resilience: The duality of digital chatter